One month after the assassination of journalist Jamal Khashoggi in the Saudi Arabian consulate in Istanbul on 2 October 2018, we start to get a clearer view of what the implications will be for Saudi Arabia. Immediately the killing led to widespread international condemnation – foreign investors pulling out of the investment conference that was being held in Riyadh at the end of October. This fallout with investors is expected to complicate in the short term the implementation of the ambitious Vision 2030 programme that the crown prince is pushing through. Domestically the ensuing diplomatic crisis led King Salman to embark on his first tour of Saudi Arabia since his accession to the throne in 2015. This tour seems to be designed to reassure the ordinary Saudis and is a way to gain stronger popular support. With regard to foreign policy we are seeing that the USA has been increasing pressure to end the war in Yemen and bring an end to the boycott of Qatar.

Since his promotion to crown prince in July 2017, Mohammad bin Salman has been the face of Saudi Arabia to the outside world. While his father remains the King, he is responsible for the large social and economic reform programme. His vision is to move away from the strict conservatism that has been a leading force in the Wahhabi kingdom since the 1980s. Instead he has been curtailing the power of the religious police and advocating the development of a domestic entertainment industry, something that had been forbidden since the beginning of the 1980s when the last cinemas were closed in Riyadh. This is the change that he wants to show to the outside world, and it was even more visible during his road show in March 2018 when he stopped in the UK and the USA to shake hands with numerous business leaders, with the clear message that change had come to Saudi Arabia. The road show was also an important promoter for his economic vision of Saudi Arabia where he aims to make the country less dependent on oil and increase the role of the private sector. While the private sector currently strongly depends on the public sector for contracts, he wants to make the private sector a real driver of economic growth. Indeed a key necessity of this plan is to attract foreign investments as they bring the needed knowhow and technology. However the current fallout have put it under pressure and shaken up the reformist image of the country. This is an additional source of uncertainty for investors, as the investment sentiment was already impacted by events such as the high-level anti-corruption purge that took place in November 2017. Nevertheless in the medium term the investment fallout is expected to remain more limited. 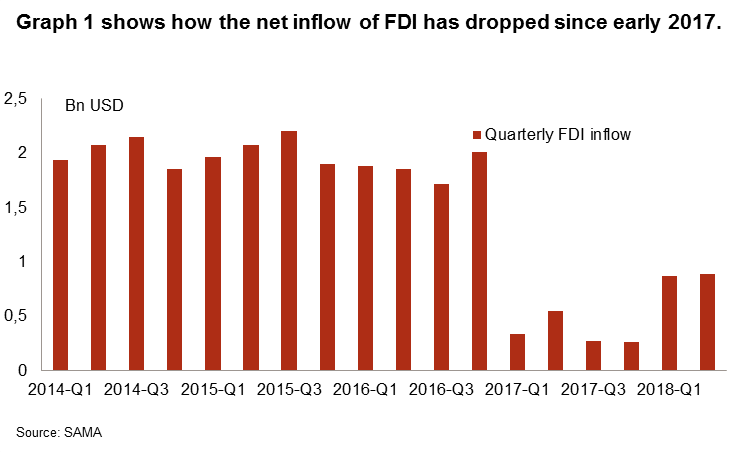 Besides the impact on the investor sentiment, we are seeing further implications. On the one hand, scrutiny over Saudi Arabia’s foreign policy has increased; with for example the USA’s increasing pressure to end the war in Yemen and to bring an end to the boycott of Qatar. And, while past foreign policy decisions had always been very careful, they have become much bolder under the crown prince – which is also clearly reflected in the war in Yemen, the blockade of Qatar, the temporary resignation of the Lebanese prime minister and the increased tensions with Iran. Lastly, domestic politics are likely to be impeded. Since his promotion to crown prince Mohammad bin Salman has been steering the country. He has strongly consolidated his position and moved the country away from the consensus-based politics that governed the country in the past. At the same time the King did intervene on three occasions. Firstly, when the elimination of bonuses and wage increases in the public sector led to too much discontent. Secondly, the King intervened by shelving the IPO of the national oil company and a third time by reiterating strong support to a Palestinian state with East Jerusalem as its capital – an idea from which the crown prince had moved away by following the line of the Trump administration. The current decision to tour in Saudi Arabia shows that the King does see the need to show reassurance toward ordinary Saudis. The recent events might therefore be an occasion to restore some of the consensus-based policy formation that we saw in the past. Moreover, prince Salman’s consolidation of power in recent months and the fact that he is in the midst of the implementation process of a bold reform programme for Saudi Arabia makes it unlikely that his position will be strongly weakened.