Credendo: TARIFF WAR US VS CHINA

Credendo: TARIFF WAR US VS CHINA

On 15 June President Donald Trump announced two waves of 25% tariffs on a total of USD 50 bn imports from China. The first one, which will take effect from 6 July, will target 818 products in various sectors, two thirds of which concern the machinery and equipment sector. The other main target is the ICT sector. Some automotive and transport products are also included. The second wave of import duties is submitted to a public consultation and should take effect later. Therefore, it is probable that the 284 products making up this second list will be hit, at least partially. This second list mainly relates to the plastics sector as well as other machinery and equipment products. Other possibly affected sectors could be the transports and metal sectors (steel and aluminium products not yet subject to tariffs).

In the aftermath of the US announcement, Beijing responded that it would directly retaliate and impose 25% tariffs on imports from the USA worth USD 50 bn. The first slice, with a value of USD 34 bn, would become effective as from 6 July and target agricultural goods (soybeans, beef, cotton, etc.), whiskey and vehicles. The second slice is a threat to add goods worth USD 16 bn in the tariffs’ scope and this mainly concerns Chinese imports of US energy (with the noticeable exception of LNG), chemicals and some medical devices.

The reason why Mr Trump is going into battle against China is that he accuses it of behaving abusively towards American companies established there, and of resorting to illegal and/or unfair practices to force technology transfers to Chinese companies. Moreover, he wants to slash the US trade deficit, and is therefore taking measures to reduce imports. For its part, China wants to fight these unilateral tariffs at any cost.

Based on the estimated shares of the exports to the country where the new duties would be applied in total sales for the sector (cf. graphs 1 and 2), the US agriculture sector (soybeans in particular, and cotton to a lesser extent) would probably be the worst affected in the short term by the implementation of the Chinese tariffs. On the Chinese side, the sectorial impact should be moderate. The Chinese machinery/equipment and electronics/ICT sectors are expected to suffer the most, although relatively less than some US sectors. About 730 products out of the first list of 818 goods targeted by US tariffs are related to those sectors, which are mainly high-tech products, at the core of the ‘Made in China 2025’ plan, which aims to make China a high-tech superpower. Also, the impact of the tariffs would probably lead to redirections of trade flows rather than to significant losses of exchanged volumes. Indeed, where there is a loser, there is always a winner. For example, Chinese soybean/cotton producers should take advantage of tariffs issued by China on imports of US agricultural products and their derivatives.

The remainder of this note focuses on the sector which will probably be the most impacted (US agriculture) by the tariff implementation on 6 July, on a sector at the core of tariffs from both sides (automotive) and on some products potentially targeted by the second wave (plastics, US energy). 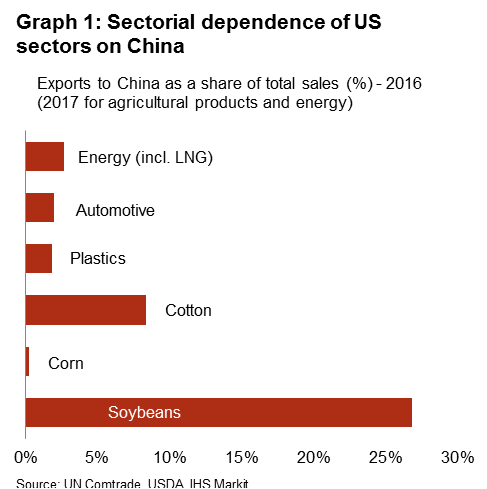 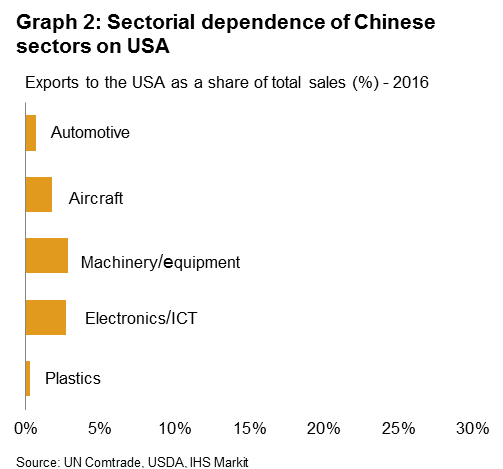 A focus on agriculture and agribusiness sectors

The agriculture and agribusiness sectors would be badly hit by Chinese tariffs. The products affected are mainly soybeans, corn, cotton, tobacco, rice, fruits and beef. Graph 3 provides an overview of the price evolution of those products since 2016. 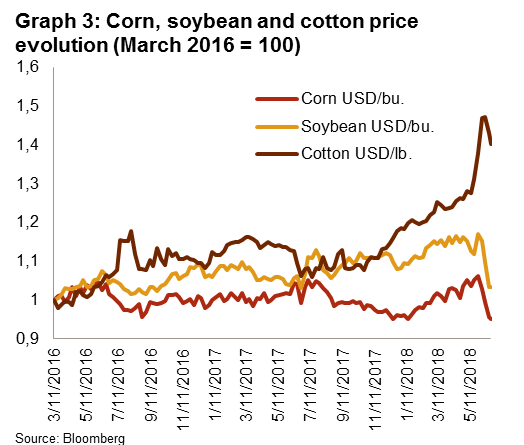 The Chinese government is going to put tariffs of 25% on imports of soybeans from the USA, effective from 6 July. According to the American Soybean Association, this tariff will be a disaster for the sector. Indeed, 57% of US soybean exports went to the Middle Kingdom, which is by far the biggest export market (cf. graph 4).

Also, 41% of Chinese soybean imports came from the USA in 2016, making the USA China’s second-largest importer just after Brazil (46%) and before Argentina (10%) (cf. graph 5). Therefore, US soybeans have an important role in both the American and Chinese economies. Although this trade war could destabilise the rural US economy, it is expected that the US Secretary of Agriculture – through its Commodity Credit Corporation – would help producers by purchasing their soybean production surplus, to mitigate the final impact of the Chinese measure. 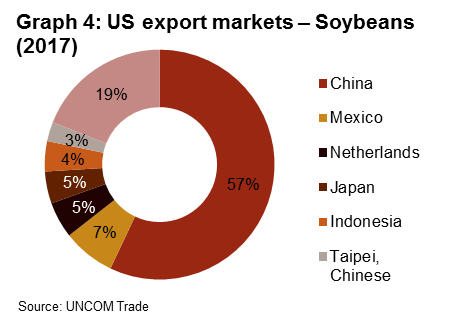 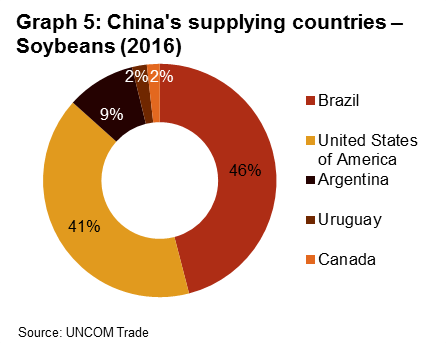 If part of American soybeans are de facto excluded from China, this would weaken the Chinese bargaining power vis-à-vis other importers given that the remaining global soybean production would not be sufficient to meet the whole Chinese demand. In the short term, this should lead to a soybean price increase in China that would inevitably push up the final price of pork and chicken on the Chinese market because the Chinese pork and poultry industries consume a lot of soybeans.

Some countries would be big beneficiaries of these tariffs, as China would search new suppliers. China is expected to buy more from its other largest suppliers – Brazil and Argentina – even if the production in those countries should be lower this year. However, the other main beneficiaries are likely to be Uruguay, Canada and Ukraine, where the soybean industry is driven by exports.

The enhanced probability of Chinese tariffs on US soybeans made the soybean price fall sharply at the end of May1. Damage to US agriculture is expected to be significant in the short term but to decrease in the longer term. The measure would indeed probably lead to a reorganisation of the world trade flows, with South America becoming the most important supplier of China, while the USA would supply the rest of the world.

Soybean producers in China would be the main beneficiary of the Chinese import tariffs as they would try to fill the gap left by US exporters. On the contrary, Chinese agribusiness firms, especially those that use soybeans as input, could see their costs increase because of the final increase in price.

Regarding cotton, in 2016, 71% of the US production was exported, 12% of which was destined for China, down from 31% in 2012, according to USDA. China is the third largest US cotton importer after Vietnam (14%) and Honduras (12%). The US cotton price is therefore expected to decrease which would erode the income of farmers. On the positive side, it should benefit the US textile industry as well as the Turkish industry, a buyer of US cotton.

The current tariffs applied to the automotive industry are 25% for vehicles imported into China and 2.5% for vehicles imported into the USA. On 15 June, China and the USA have announced additional 25% tariffs on some imports from that sector, some being already implemented as from 6 July. Motorcycles, spare parts and cars (irrespective of engine, power, etc.), as well as auto parts, are concerned.

The Chinese car market is a big market, with a small share of imported cars in terms of total sales (4%); it offers big opportunities to foreign car exporters. Currently, the USA has a significant trade surplus with China. Therefore, higher Chinese tariffs on the automotive trade would severely impact US car manufacturers. It would force car manufacturers to revise their strategies in terms of supply chains and cause manufacturing plants to relocate out of the USA in order to avoid Chinese tariffs. Besides, US companies also manufacture cars in China for sale in the USA, but in smaller proportions2.

Finally, at the end of May 2018, the US Department of Commerce initiated a ‘Section 232’ investigation in order to assess whether the import of foreign cars on the US market threatens national security. Even if this investigation could take several months (up to one year), the impact could be even more important than that of a simple import tariff. Indeed, the application of ‘Section 232’-related tariffs would significantly damage foreign automakers, above all those from Asia where Japanese firms for example have exports to the US accounting for 40% of their global vehicle exports. Finally, it should reduce the trade flows, or at least reshape the international supply chain, leading some firms to shut down, relocate or make thousands of workers redundant.

Plastics are potentially targeted by both countries

The Chinese plastics sector is potentially targeted as it is part of the list that will be subject to the US public consultation. However, the sector is very little dependent on the US market as exports to the country are estimated to be less than 1% of the total sales of the sector. The imposition of tariffs would thus have a very limited impact.

The US plastics and petrochemical products are included in the list of the second slice of Chinese tariffs, the implementation of which has not yet been decided. Such import duties would certainly be meaningful for the US sector, at a time when it is investing massively in new production capacities, expansions or restarts of existing facilities, some specifically dedicated to exports to China. China was the third biggest export market for US plastics and plastic articles in 2017, after Canada and Mexico. Nonetheless, in 2016, exports of plastics to China represented a mere 2% of production (including domestic sales).

Two products that could see major changes in trade flows are polyethylene and propane. A boom in the expansion of the US production capacities of these two products is being driven by the surge in US natural gas production, which provides a cheap and abundant source of by-products to feed production. There is a substantial new polyethylene US capacity, which will come online next year, most of which is for exports, particularly to China. As the global market is well supplied, China could turn to other, cheaper markets following the implementation of the tariffs. US polyethylene would then have to find new markets, which could weigh on US polyethylene prices. As for propane, China has been investing in plants that produce propane from propylene, and those facilities have been counting on a steady supply of US propane, expected to come on stream in 2019 and 2020. Here again, markets are well supplied and China could turn to new markets to source its propane, leaving the USA in search of new markets.

The US energy sector, potentially targeted by China

The US energy (crude oil, coal but not liquefied natural gas) products are on the list of products potentially targeted by China in the second wave. Exports of US oil, gas and coal to China have been rising sharply, in particular since 2016 after restrictions on exporting domestically produced crude oil were lifted in December 2015, and the US energy sector has been running a bilateral trade surplus with China. China is the destination of almost 20% of the US crude oil exports. The producers would have to find new markets, probably implying a discount and weighing on their profitability.

1 The price fall is due to the combination of additional factors among which dollar strengthening, new USDA projection of output and additional tariff-related risks coming from Mexico related to soybeans and corn.

2 Paradoxically, American firms that manufacture in China and sell to the USA would be subjected to tariffs of 25% (instead of the current 2.5%).