Hernández is the first president in modern Honduran history to win a second term. Indeed, it took the electoral authorities several weeks to declare the winner of the presidential election held on 26 November. Current President Juan Orlando Hernández and opposition leader Salvador Nasralla have both claimed victory in the past month. The day after the polls it seemed that Hernández was trailing Nasralla by five points, with 57% of the votes that were counted, a large margin which was deemed statistically nearly impossible to overturn. However, a couple of days later a dramatic swing of the trend occurred and the vote showed a narrow win for Hernández after endless delays and a glitch in the vote tallying system. Due to violent protests, a temporary curfew was imposed and part of the votes was recounted. Almost a month after the ballot, results showed that the conservative incumbent President Hernández won by 1.5% of the vote. Consequently, the Honduran tribunal declared Hernández the winner of the disputed elections. As the US backed Hernández a couple of days later, Nasralla conceded as a response. Nevertheless, the chaotic count and the belief that such a large swing in vote was unlikely, is likely to continue sparking violent protests.

Before the elections were held, Hernández was expected to win decisively thanks to the important progress made under his term. He is indeed credited with slashing the budget deficit from 7.5% of GDP in 2013 to an estimated 1% in 2017 as he was trying to reduce the country's public debt burden (standing at an expected moderate level of 43% of GDP in 2017), which led to an upgrade of the Honduran debt by credit rating agencies. The sharp drop in murder rates, once the world’s highest, is also attributed to his efforts. 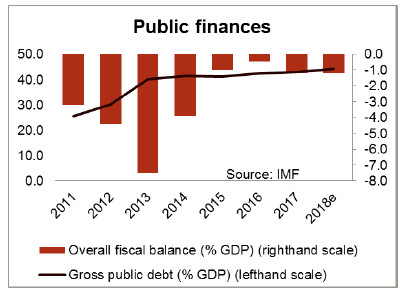 However, many Hondurans are likely to be angry at Hernández because of the string of corruption scandals that took place during his term. Moreover, his re-election bid was controversial as critics accused Hernández of bullying the institutions that are supposed to be checks on his power. As president of congress, in 2012, he allegedly orchestrated a vote to sack four Supreme Court judges, and their replacements helped overturn a ban on re-election in 2015. The new government will likely continue to pursue policies aimed at promoting foreign investment and fiscal consolidation while further introducing militaristic security measures against crime. However, the issue around vote-counting delegitimised the government, increased political polarisation and heightened tensions. All this might lay the foundation for long-term unrest. Nevertheless, economic prospects are bright for the country. GDP growth is expected to stay robust at around 4% in the medium term. Furthermore, the current account balance is forecast to remain around a modest -4% of GDP (coming from almost -10% of GDP in 2013), helped by the historically low oil prices. Additionally, the external debt is likely to be stable and moderate at approximately 40% of GDP in the coming years while the foreign exchange reserves are forecast at around 4 months of import cover, a healthy level.